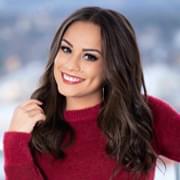 Which vehicles have Americans loved to drive the most this year?

COVID-19 has strongly informed consumer trends over the past year, including new and used car buying behavior. The coronavirus pandemic has shaped how we travel, and with restrictions on and advisories against public transportation use, many Americans opted to get behind the wheel themselves. According to Apple Maps Mobility Trends Reports, driving patterns have leveled out to typical pre-pandemic rates as of January 2021,  while transit use still lags at a 54% decrease from March 2020.

Cars have remained a reliable necessity for many, despite the uncertainty of the times. The country’s return to normal driving patterns, when compared to the reluctance for many to get back on public transit, illustrates the resiliency of the automotive market. In fact, despite seeing an overall decline in auto retail sales in 2020 by approximately 15%, this loss is projected to be less than that of the decline during the 2008 Great Recession (18%). Additionally, car retailers benefited from the demand for individual mobility, with many dealer groups reporting record profits in the third quarter of 2020. Given the extraordinary challenges presented by the pandemic, this relative stability of the market is remarkable.

Curious to see how the pandemic has affected consumer behavior in the auto industry, the research team at Insurify crunched the numbers to identify the most popular vehicle in each state for 2021. 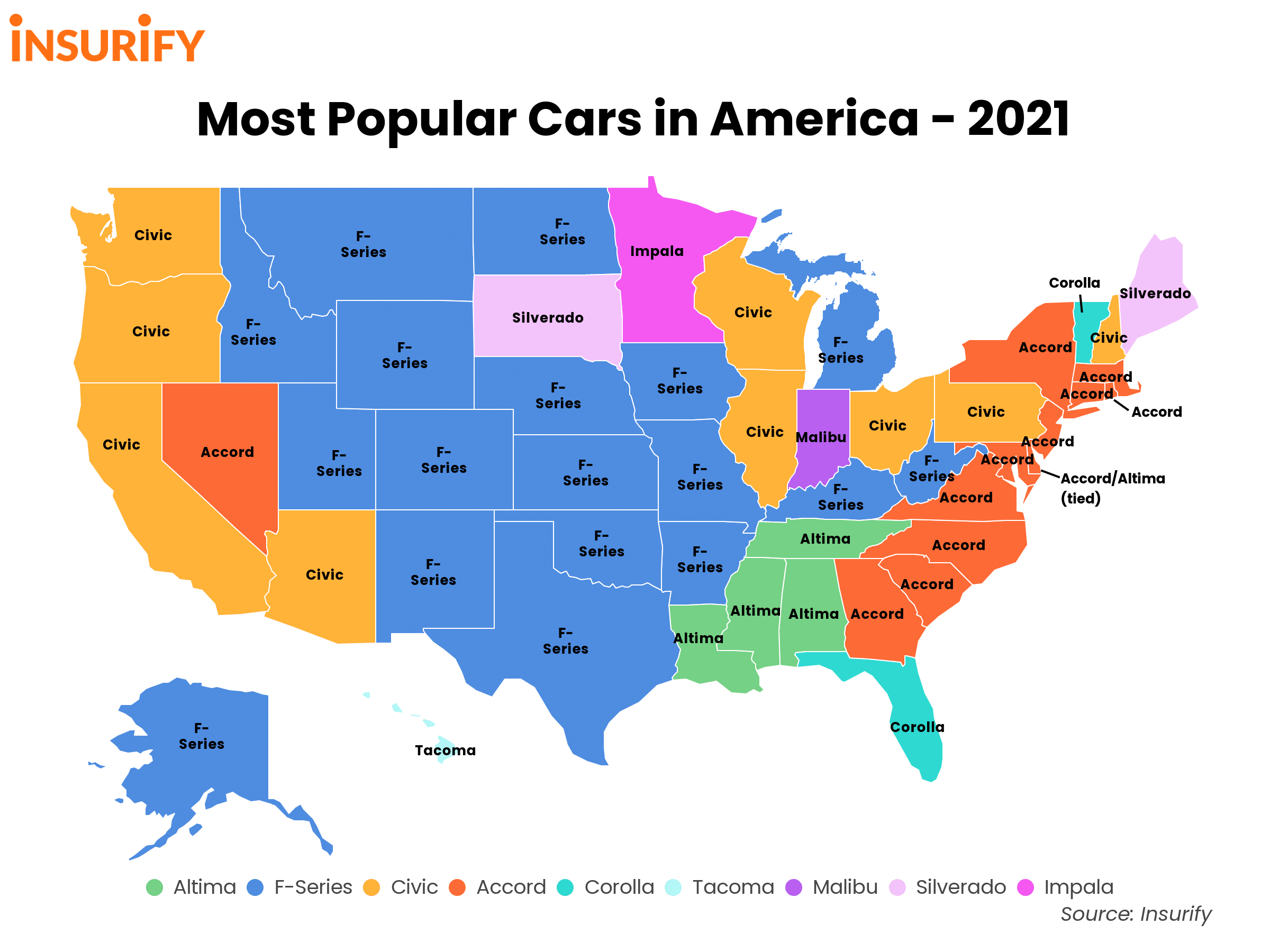 To determine the most popular vehicle in each state, the research team at Insurify, a site to compare auto insurance quotes, turned to their database of over 2.9 million car insurance applications. Applicants must disclose their driving history and information about the make and model of their vehicle when applying for car insurance, in addition to their state of residence. The vehicles with the highest number of drivers in each state were named the most popular car for their respective states. The models were then ranked by the number of states in which that vehicle holds the number one spot. To round out the list to include the top 10 vehicles in the United States, the vehicle in the tenth spot is the second-most popular vehicle across the nation (but does not hold the number one spot in a particular state).

MSRP and MPG were taken from the manufacturers’ websites for the 2021 starting price for that model. Safety ratings come from the National Highway Traffic Safety Administration’s evaluations (out of 5 stars) for the most recent year of each model. Data on the average price of a new car was gathered from Kelley Blue Book.

10 Most Popular Cars in America

The Honda CR-V holds the top spot in the second-most popular vehicles among all fifty states. This midsize SUV is sporty, spacious, and a solid choice for both city and highway driving. The CR-V was also named an IIHS Top Safety Pick for 2020, affirming its status as a safe and affordable model that has maintained its well-adored reputation.

The ninth vehicle on the list is proof that pickups rule the roads this year. The first of three pickups in the rankings, the Toyota Tacoma is the top pick for drivers in Hawaii, where it ranks as the number one vehicle in the state. Notably, the Tacoma is the only vehicle among the top 10 with a less-than-perfect safety rating. However, its affordable starting price, tailored capabilities for rough terrain, and brand reputability (Kelly Blue Book named Toyota the Best Truck Brand for 2020) are strong selling points that keep drivers coming back.

While 2020 was the last manufacturing year for the Chevy Impala, this model did not exit the market unnoticed. With a plush and roomy interior, the Chevrolet Impala was named the Best Large Car for the Money Award in 2020 by US News. The primary concentration of Impala fans is in Minnesota, where this large car’s 4-wheel drive comes in clutch for those snowy Northern winters. Although this Land of 10,000 Lakes favorite has been discontinued following 2020, its longstanding reputation will certainly live on.

The second Chevy in the rankings, and the seventh overall most popular car in America, the Malibu has maintained a loyal following among its customers over its many years on the market. As of 2021, Malibus have been in production and on our roads for 57 years running. Touted as the “modern take on the sedan” by Chevrolet, the Malibu is a stylish yet still affordable model with a solid fuel economy and highly rated safety features. The Malibu has found an especially fervent fanbase in the Great Lakes region, particularly in Indiana, where it is the most popular vehicle in the state.

The Chevrolet Silverado, along with other pickup trucks, has certainly increased in popularity over the past year This pickup has grown its fan base over the past year for good reason; Silverados are not only roomy and powerful, with 89.1 cubic feet of cargo space and up to 13,300 lbs trailering capacity, but also affordable and relatively fuel-efficient for their class.

The Toyota Corolla is sleek, has a great fuel economy, and is the fifth-most popular car in the nation. This midsize sedan has maintained its acclaimed status in Insurify’s top ten rankings over the years, likely due to its longevity, reliability, and loyal customer base. Corolla fans can be found from the cold mountains of Vermont to the sunny beaches of Florida, demonstrating that this vehicle is adaptable and reliable, rightfully earning its place among the top five.

While the Nissan Altima has fallen from its spot at number one in the nation in 2020, not much love for this vehicle has been lost. This midsize sedan nabbed a 2020 Top Safety Pick from the Insurance Institute of Highway Safety, and continues to maintain its stronghold in the South. With a bold exterior, intelligent all-wheel drive, and advanced safety features, it’s no wonder why Altimas are the optimal pick for many drivers.

This sporty sedan is a favorite on the West Coast and in the Great Lakes region in the United States. The Honda Civic moved up one spot from last year’s rankings, and it’s not hard to see why. With five models in the Civic family, ranging from the classic coupe to the Type R Limited Edition, fuel efficiency for days, and relatively low base prices, the Civic’s appeal is well-earned.

The Honda Accord holds its spot from last year’s rankings at number two, speaking to this model’s consistent popularity. The Accord is widely beloved on the East Coast primarily, although it does have its share of loyal drivers out west in Nevada. This midsize sedan has a high safety rating, great mileage, and a sensible starting price, making the Accord a continual favorite in the nation.

Ford F-Series Pickup trucks picked up steam this past year. This highly-rated, affordable and sturdy series of pickups made here in the USA is the vehicle of choice for 18 states. While Insurify identified the Ford F-Series as the most popular pickup truck in the United States, it’s also claimed the top spot as the overall most popular car in the nation.

*The Honda Accord and Nissan Altima tied in first place for Delaware.

If you have any questions or comments about this article or would like to request the data, please contact insights@insurify.com.